The Damascene art was known for centuries in Egypt, Greece, Rome, Arabia and in Japan. Around the XV century the art work became popular in Europe, and Toledo, Spain became European capital of damascene industry. Toledo is also famous by production of Toledo swords made of the legendary Toledo steel.

Traditionally Damascene designs focus on two distinct types of patterns. Either Renaissance motifs with birds, usually doves, and flowers or Arabesque and geometric designs. Our damascene products are hand crafted by damascene artisans in Toledo Spain and many of the designs will reflect the artisan’s unique personal interpretation creating a highly collectible jewelry or gift item.

A lot of the "Damascene products" advertised for sale on the internet are actually made in the "Damascene Technique" or would be better called "Faux Damascene."  They have the appearance of genuine Damascene, in that they are often black and gold, but the gold is not usually genuine 18k or 24K, or even gold at all, and much of it is mass machine produced, usually in the Far East.

We sell only the genuine damascene products from Toledo, Spain.

Damascening is the art of inlaying different metals into one another-typically, gold or silver into a darkly oxidized steel background-to produce intricate patterns similar to niello. The English term comes from a perceived resemblance to the rich tapestry patterns of damask silk.

Damascening step 3
Fixing the gold and closing up the steel lines.

Damascening step 6
Burnishing the gold thread with a burn.

Uncommon hand made jewelry and other products in antique style for true true collectors, art admirers and history lovers.

Collection of the damascene art 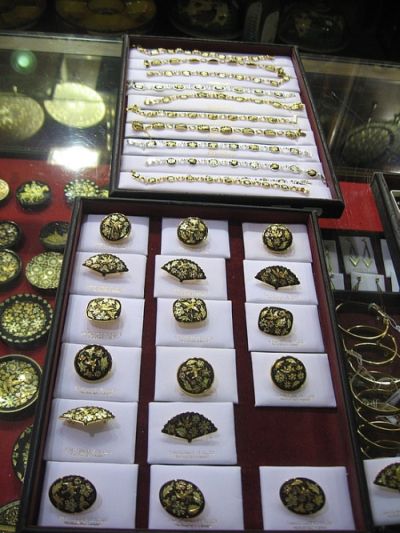