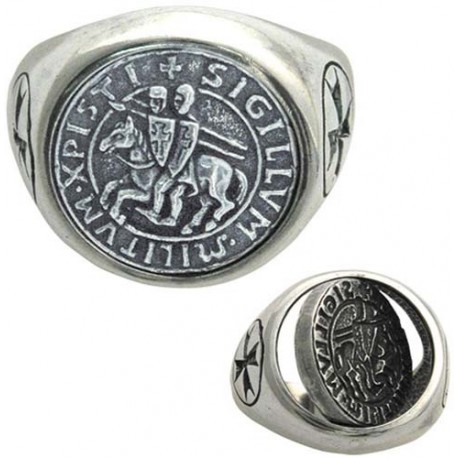 Seal ring of the Templar Order.

This beautiful reversible insignia ring bears the Seal of the Templars (one side in relief the other in intaglio) to allow use in creating a wax seal. Available in different sizes. Made of Silver.

The stamp of the Templar, emblem of the order; is two knights mounted on the same horse (representing the duel vocation of the order - religious and military) with the inscription in Latin "sigilum militum Xpisti" - (Stamp of Christ's militia).

Templars - Monks - Soldiers: Guardians of the Faith, Guardians of the Holy Land, and Guardians of the Pilgrims. The Templar order, of religious and military character, was founded in Jerusalem in the year 1118 by nine crusader knights. with the official denomination of "Order of the Poor Knight of Christ". Later they were known by the "Knight of Solomon's Temple" (Templar) denomination after establishing themselves in King Solomon's ancient temple. The Pope Inocencio II recognized the order of the Templar in the year 1139.